Away from work, one of the hats I wear is as a soccer coach – assistant to a friend as we coach a boys u17 team.

A few weeks ago we had a match – our first match since last year.  Thanks to Covid.

I noticed during the match that one of the lads – let’s call him “John” – was getting a bit frustrated with himself. Things weren’t going the way he wanted.  John’s a great lad – and is tougher on himself than he is on any of his teammates.

Perhaps you disagree with me about that being a mistake.  So, here’s another example:

Imagine you deliberately break a red light while driving.  And you don’t get hit by a car and you don’t hit anyone.  So the outcome was good.  But what was the quality of your action?  Yep – it was awful – selfish & dangerous.  You got a “good” outcome through sheer luck.

Can one call have been bad and a near-identical second call have been good?  If course not.  When making sales calls you’ve no idea how the recipient is going to react.  Maybe one of them hates receiving cold calls while the other just happens to have an immediate need for the widget you’re selling.  You have zero control over that.  What you do have control over is what you do: 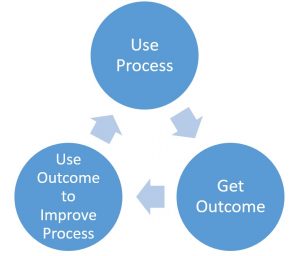 So: operate ad-hoc or be process-driven?

Get regular emails on how to be more effective & productive